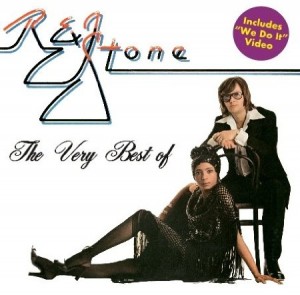 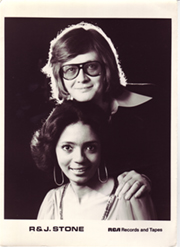 R&J Stone was the union between myself, the ‘R’ and my late wife Joanne, the ‘J.’

We met while touring with James Last in 1973 and got married in 1974. The song ‘We Do It’ was one of 3 songs I demoed and the inspiration for those songs was Ashford & Simpson. They were a black American duo, prolific songwriters and great singers, and as I listened to the records we brought back from the States – Joanne was from Newark, New Jersey – I realised the potential of Joanne and I singing together.

The songs were played to Phil Swern the producer. He liked the songs and recorded them and it was very obvious from the beginning that ‘We Do It’ was a very strong, commercial song. We were signed with RCA and ‘We Do It’ was released towards the end of 1975 and charted early in 1976 reaching number 4. The song punched way above its weight in terms of media coverage and there was quite a storm for short period. We went on to record two albums but management difficulties and my own lack of understanding how things work did not help in terms of promotion and sales. But we recorded some great songs that are now available in a double CD, the very best of R&J Stone. One of the very first music videos ever made, again of ‘We Do It,’ is also included.

The death of Joanne in 1979 brought all of that to a juddering halt, but while it lasted it was a wild, and hugely enjoyable ride and I remember it with great affection.

The track still gets radio coverage to this day and means a great deal to me, the thought of it helped me through the dark times of great loss that were to come.